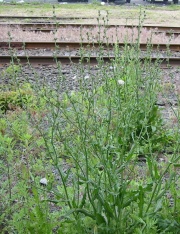 A perennial herb, Cichorium intybus, in the dandelion family with large bright blue flowers. Chicory is native to Europe and was introduced in the U.S. in the late 19th century. The ground and roasted roots of the chicory produce a bitter brown liquor that has been used as a coffee substitute and as a pale brown dye. The colorant has been added to size solutions to darken new book leaves to the tone of older leaves (Roberts and Etherington 1982).