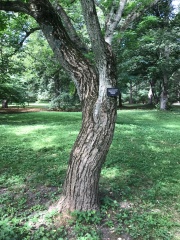 Chinese cork tree (Phellodendrom chinense), all called 川黄檗, Chuan Huang Bo, is deciduous trees that can grow up to 15 m. It grows in central and south China. 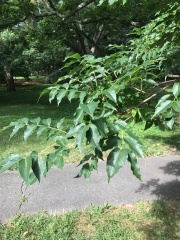 Phellodenrom spices have been recorded to dye paper both in China and in Japan. The dyed paper is called Yin Huang Zhi (hard yellow paper) in China In Qimin Yaoshu, a 6th century Chinese book, described how to dye paper with huangbo (Chinese name for Amur cork tree) in great details: "When the huangbo is thoroughly soaked, if one throws away the dregs and used the pure liquid only, it is wasteful, after soaking the huangbo, the dregs should be pondered and boiled, pressed in a cloth sack, and again ponded and boiled, three times. The liquid is then added to and mixed with the pure juice. Thus four times as much liquid is saved, and the paper so dyed will be bright and clear." [2]

Chinese cork tree was extracted with 1 mL methanol:water (v:v=1:1). Then the upper 30 μL of solution was removed for HPLC-DAD-MS analysis (20 μL was injected).

[[|center|frame|sample and experiments info by R. A. Laursen, Boston University]] 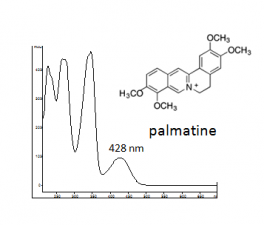 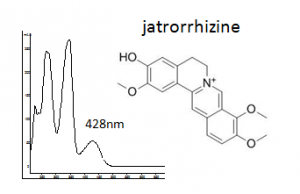