[International Paper] A former registered trademark for a tricolor process used to make color prints from slides and transparencies. Cibachrome was introduced in 1963 after the merger of Ilford UK and Ciba-Geigy Photochemie of Switzerland. Its name was officially changed to Ilfochrome in 1992 when Ilford was purchased by International Paper, but it is still commonly called Cibachrome. The Cibachrome process uses pure cyan, yellow, and magenta color azo dyes. Once exposed, the film is placed in a black and white developer, then an acid bleach bath followed by a fixer. The bleach step removes the dye colors in regions where they do not occur. The Cibachrome process produces highly saturated, permanent colors with excellent sharpness and contrast. In 2012, Ilford announced its final production run of Ilfochrome 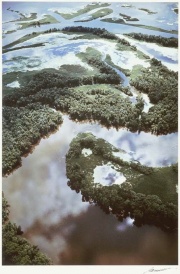