A hard, strong construction material cured from a semi-fluid matrix of water, Sand, and [[aggregates|aggregate] with Cement and/or Lime. Several types of aggregate are used such as crushed stone, Slag, cinders or gravel. Ancient Romans developed Pozzolan cement about the 3rd century BCE. Modern concretes use various cements such as portland or hydraulic. Concrete is durable and relatively inexpensive. It is used for building foundations, bridges, dams, walls, highways, etc. Concrete is strong in compression but weak in tension so it is often reinforced with steel bars or wire netting. Once a concrete mixture is stirred with water and poured into a mold, it should be allowed to cure slowly over about a week. Stresses, such as vibration, freezing, and rapid drying, will diminish the strength and durability of the concrete. As it ages, concrete is subject to Erosion, spalling, and pollution. Poor mixing can cause erosion. Spalling can be due to freeze-thaw cycles of moisture and ice, salt crystallization, or Corrosion of Steel reinfocements. Acid rain can deplete the natural alkaline reserve of fresh concrete. 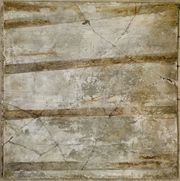