A bright green powder known as the pigment Emerald green. Copper acetoarsenite is prepared by reacting Sodium arsenite with Copper sulfate and Acetic acid. First manufacturered in 1814, it has a brilliant green color that was used in oil and watercolor paints in the 19th century. It is no longer used in artist paints because of its toxicity and poor color permanency. Copper acetoarsenite is currently used as a wood preservative, larvicide and antifouling agent in marine paints. 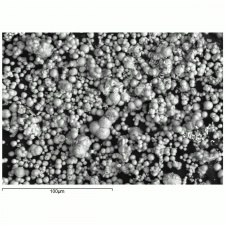