Dark blue hexagonal crystals or black powder composed of Copper sulfide. Covellite was named for Niccolo Covelli after he discovered the mineral at Vesuvius in the early 19th century. Copper sulfide was probably used as a black pigment in antiquity (Orna et al 1980). It is currently used in antifouling paints and in textile dying with Aniline black. 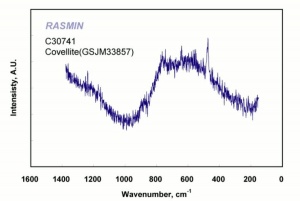