A natural catechu dyestuff and tanning agent obtained from the heartwood, leaves, pods and twigs of several trees, such as Acacia catechu or Uncaria gambier, that are native to southeast Asia and India. Cutch was used in India since ancient times. It was exported to Japan and China as early as the 1500s but was not used in Europe until the 1800s. The primary colorant in cutch is Catechin. The dark brown to black, water extracted dye is sold as dried chunks or a coarse powder. It colors wool, silk and cotton to a light brown color without a mordant (called khaki) and various shades of dark brown with a mordant. Cutch retains its color well through washings and exposure to light. Cutch may also be used for tanning where it produces a stiff yellow leather. The primary tannins are Catechutannic acid (25-35%) and catechin (2-10%). This dyestuff became obsolete, however, between World War I and World War II. 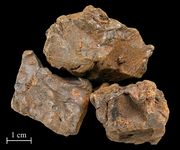