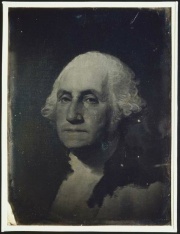 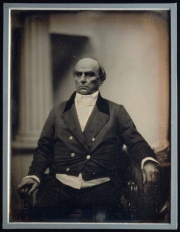 An early photographic process developed by Louis Daguerre of Paris in 1837. Daguerreotypes were primarily used for portraits from 1840-1860. Initially the copper daguerreotype plates were cold roll-cladded with a thin silver layer. After 1850, an additional electroplated silver layer was added to produce a harder surface. The silver layer was sensitized to light with iodide or bromide vapor. After exposure to the image, the plate was developed with Mercury fumes which attached to unexposed portions of the plate to form a positive metallic image. The plate was fixed by removing any remaining Silver halide with a Sodium thiosulfate solution. Daguerreotype images tended to be weak until 1840 when a method to enhance the image with gold toning was introduced; later images were often hand colored with pigments. The surface of the daguerreotype is delicate and readily damaged by moisture and pollutants. The images were often sealed in decorative metal mats with a glass cover for protection.