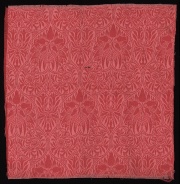 A decorative textile with a woven, reversible pattern first made in Damascus in the Middle Ages. Crusaders introduced the fabric to Europe about 1100 CE and by 1300 a major center for linen damask was established in France. The Netherlands and Ireland also became major producers by the 17th century. Originally made from silk, modern damask fabrics contain one or more of the following types of fibers: Linen, Silk, Cotton, Wool, and rayon. Its elaborate patterns are produced by interspersing types of weave such as a flower in satin weave on a plain woven ground. The reverse side has a negative image of the flower in a plain weave pattern on a satin ground. Mechanical methods for weaving damask were introduced in 1835. Damask fabrics are used for upholstery, tablecloths, napkins, drapery, and book covers. 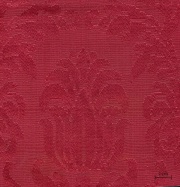