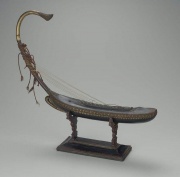 Leather made from the skin of a deer or other ruminants from the family Cervidae. It was used for bookbinding from the 8th century to the Middle Ages (Roberts and Etherington 1982). It has also been used for garments, such as jackets, shoe uppers, and gloves. When the outer grain is removed, these skins are generally called Buckskin. Split cowhides are sometimes substituted for deerskins.