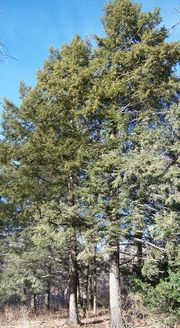 A hemlock tree, Tsuga canadensis, native to eastern North America, ranging from Alabama to New England and west to Wisconsin. Eastern hemlock trees generally grow to 31 with trunk diameters of 1.8 m. It typically has a straight trunk with horizontal branches that droop to the ground. It is the state tree of Pennsylvania. The softwood tree produces coarse-grained wood that is strong, lightweight, and splinters easily. It is used primarily for paper pulp, but also for boxes, crates and railroad ties. Tannins extracted from the bark are used to make leather. The Eatern Hemlock is the state tree for Pennsylvannia. The tree is killed by a non-native insect (hemlock woolly adelgid)