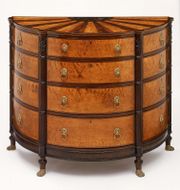 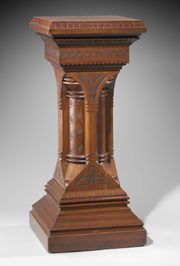 A large conifer tree, Pinus strobus, found in the Eastern North America from the Appalachians to Canada. The Eastern white pine grows in well-drained, humid climates to heights of typically 70m. The needles occur in bundles of 5 to lengths of 5-13 cm. Their seed cones are only produced every 3-5 years and are slender with lengths of 8-16 cm and widths of 4-5 cm (when open). The trees were extensively logged in America prior to the 20th century resulting in a current old growth forest of less than 1%. The Eastern white pine lumber is a relatively soft, pale color, coarse-grain wood that was widely used for construction in the 19th century. The knot-free wood was used for colonial homes for paneling, floors and furniture. Currently, the straight-grain wood is used mainly for interior millwork, boxes, and matches.