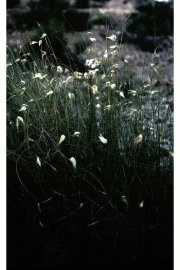 A tough, coarse, spiky grass (Stipa tenacissima or Lygeum spartum) native to southern Spain anst grades are thought to come from Spain (Spanish grass) while less expensive grades come from northern Africa (Tripoli). The slender, wiry grass was used for basketry, ropes, and mats since ancid northern Africa. The beent times. The gray-green spear-like leaves of this desert plant produce fine, light fibers that are about one centimeter long. The fibers have a high proportion of Alpha cellulose. They produce a high-quality, lightweight paper that is used for writing papers as well as for intaglio color printing. Esparto fibers are used extensively in England and Scotland for the production of paper, but rarely used in the U.S. because Wood pulp is plentiful. The presence of esparto in a paper may be determined by the Hertzberg test (iodine-chloride solution - positive stains deep violet) or by boiling the specimen in 1% solution of Aniline (positive turns pink) (Roberts and Etherington 1982). 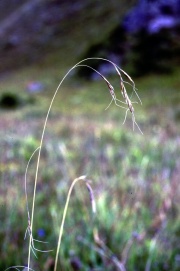