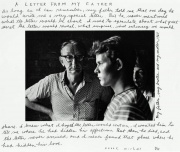 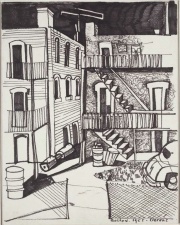 A writing utensil with a sturdy porous tip that wicks a constant supply of ink. Felt tip pens were first introduced in Europe in 1911 as the Signier pen by Kaweco (Ellis 1999). Early pen tips consists of a felted wool. Later, nylon and polyester fibers were used. Most recently, the tips have been made from a porous plastic. The inks are composed of soluble dyes dispersed in a resin matrix with either water or alcohol solvent. Since the 1950s, ethylene glycol has been added to the mixture to prevent the tips from drying (Ellis 1999). Many of the colored inks are fugitive and solvent sensitive.