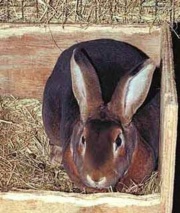 The soft, velvety fur of the Castor Rex rabbit (Oryclolagus cuniculus). Most rabbits have long, coarse, flattened guard hairs which protect the fine undercoat hairs. The fur is thick and soft, but the skin is weak so the hides are usually sheared to produce Rabbit hair. The Castor Rex rabbit does not have guard hairs, only the thick underfur. Since at least 1919, it has been bred for its skin. Rabbit fur is used for linings and inexpensive garments. It is often marketed as northern seal. Most rabbit fur is obtained from Europe, Asia, New Zealand and Australia.