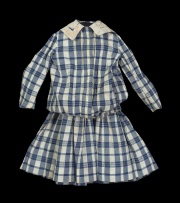 A plain weave, lightweight Cotton fabric with a check pattern. Gingham cloth (Ging-Gang in Mayasian) was originally imported in the 17th century to Europe from southeast Asia as a striped fabric. By the mid 18th century, the mills of Manchester, were selling gingham with a blue and white checked pattern. Currently, gingham is typically made with two colors of yarn in both the warp and filling directions. The color changes are made at evenly spaced intervals to produce a balanced pattern of square blocks. Gingham is used for dresses, shirts, curtains, and children's clothing. 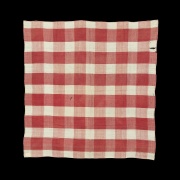 Will shrink and wrinkle unless pretreated.