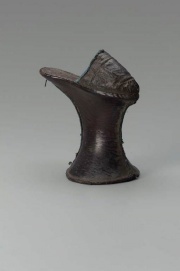 Term used for both the unprocessed skin and the tanned Leather made from a goat of the genus Capra. From the 11th century, the Moors produced famous soft, fine leather from goatskins tanned with Sumac. Moroccan goatskin leather was commonly used in book bindings from the early 16th century. Currently goatskin leather is still produced in England from hides imported from the Middle East, India and Africa. Most goatskins are vegetable tanned or chrome tanned. They are still used in bookbinding since goatskin tends to be stronger, denser and longer wearing than sheepskin. Goatskins are also used for shoe uppers, gloves, and linings.

Has tiny pin-point holes in a row, usually in groups of three.