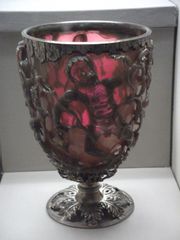 A deep red glass colored with metallic gold. Gold ruby glass was made by the ancient Egyptians and Romans (Lycurgus cup) The color is produced by a colloidal gold solution prepared by dissolving gold in Aqua regia. The glass may also contain some tin or silver salts. The ancient technique for making ruby glass was lost for centuries. In 1676, a Hamburg physician, Andreas Cassius, described the red colouring properties of a solution of gold chloride which was subsequently called Purple of Cassius. Soon after (c. 1679) Johann Kunckel von Löwenstern, a German glass maker, produced the deep red color in glass, but kept his technique of double heating a secret. The method was again rediscovered at the end of the 19th century at the glassworks at Ehrenfeld. Variations in the red color are obtained by the temperature at which the glass is worked. One type of gold ruby glass called ambernia, has color gradations ranging from amber to ruby.