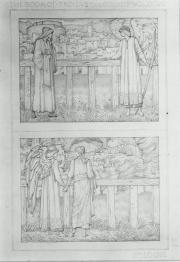 Naturally occurring Graphite was used as a writing tool in the 16th century. The soft greasy graphite produces dark, easily smeared lines. A graphite deposit was discovered in the Cumbrian Mountain region of England and mined for two centuries. Graphite was produced as small lumps of wadd, or black lead, for use in writing. In 1795, the procedure for preparing graphite with clay for use in pencils was developed concurrently by N. Conte (France) and J. Hardmuth (Austria). The graphite was mixed in a slurry with Clay then extruded to form thin rods known as leads. These were fired at temperature of 1000-1100C then glued into shaped pieces of Wood to form a Pencil. The ratio of clay to graphite determines the hardness of the lead with an average hardness have a ratio of 2 parts graphite to one part clay. The common, though incorrect, use of 'lead' for the graphite point was a carry over term because lead points were previously used in drawing pencils.