A hard, brittle Cast iron that contains 1-3% Silicon in addition to the Carbon. In grey cast iron, the silicon causes the carbon to come out of solution as Graphite. The small flakes of graphite imbedded in the ferrite matrix make the alloy flow easily when melted; the resultant iron alloy is softer and has good corrosion and wear resistance. Gray cast iron is extremely brittle and can shatter when struck. 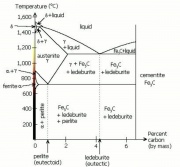