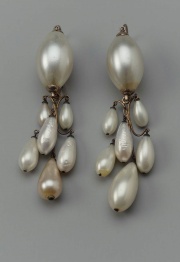 An inexpensive, imitation Gemstone. Artificial pearls, first made in the 19th century, were constructed by injecting hollow beads of Glass with a mixture of aqueous ammonia and fish scales. This deposited a layer of Guanine crystals as an iridescent film on the interior surface of the beads. In the 20th century, another process made imitation pearls by coating the exterior of solid glass beads with the fish scale mixture. The nacreous coating was sealed with a protective Varnish layer.