A light produced when an electric current flows through a wire contained in an glass bulb. The resistance of the filament causes it to heat up and glow, thus producing the bright illumination. Thomas Edison made the first commercially viable incandescent bulb in 1879 with a Carbon filament in an evacuated glass bulb. Tungsten filaments were introduced in 1907 and widely used due to their high melting point. They are placed in a glass bulb filled with inert gases, such as Argon, to prevent combustion and minimize evaporation of the wire. Tungsten produces a warm yellowish light with a color temperature in the range of 2700-2900 K (standard) or 2900-3100K (low voltage). Incandescent lights have a fairly good color rendering index although they are stronger in the yellow and weaker in the blue regions. They emit little ultraviolet light, but produce high levels of Infrared radiation (heat). Incandescent lights are energy inefficient and have a short lifespan (750-1000 hours). Thus, more energy efficient technologies, such as fluorescent, then LED lamps are now used. 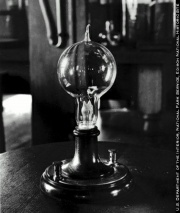