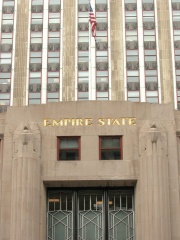 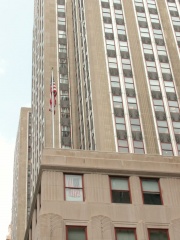 A general name for many limestones quarried in Lawrence, Owen, and Monroe Counties of Indiana. Indiana limestone is a fine-grain, uniform Oolitic limestone that is soft and easy to carve. It is widely used by American sculptors and considered one of the best American limestones for building. Indiana limestone ranges in color from a gray or buff to a variegated that is white with buff and gray clouds. Some of the brand names for Indiana limestones are: Bedford stone; Indiana Buff Statuary; Dark Hollow; Peerless; Sanders; Bloomington; Wellington Cream; Old Blue Hole; Hoosier Silver Gray; Doyles Quarry; Ellettsville stone. In Washington DC, Indiana limestone was used for the exterior of all the buildings on the north side of Constitution Avenue from the Department of Labor to the Federal Trade Commission Building. The durable stone was also used for Chicago's City Hall and Tribune Tower along with New York's Empire State Building.