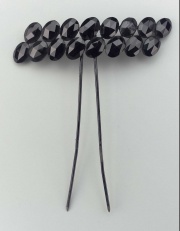 A dense, black, lignite Coal that can be carved and polished. Jet is found in large deposits near Whitby in England and in the Asturias in northern Spain. Smaller deposits are found in France, Germany, the Czech Republic, Slovakia, Italy, Portugal, Canada, and the USA. Jet was formed from driftwood from pines of the Araucaria genus that were subjected to intense pressure. The soft, brittle material flakes easily and can be worked with saws, drills and engraving tools. Jet has been used for beads, jewelry, cameos, buttons, and small decorative items since Neolithic times. Jet became popular as mourning jewelry during Victorian times. Imitation jet jewelry has been made from black glass (Paris jet), dyed chalcedony, black tourmaline, obsidian, melanite, ebonite, and vulcanite.