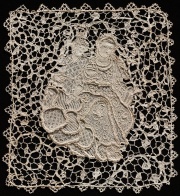 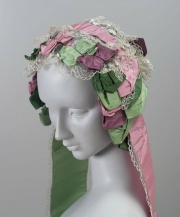 A decorative fabric consisting of an openwork pattern of threads. Early samples of decorative knotted cords have been found in Peru dating from about 2000 BCE. Modern lacemaking techniques originated in Europe with two primary kinds of laces: needlepoint and bobbin. Needlepoint lace derived from embroidery while bobbin lace is a form of weaving or macramé. Needlepoint, or point, laces are hand embroidered with a needle and, typically, a buttonhole stitch. Point laces were first made in Italy in the early 16th century, then quickly spread through Europe and are still being made in Ireland and Belgium. Bobbin, or pillow, lace is made with spools of thread that are wound around pins then plaited, interlaced, twisted, and/or knotted. Bobbin laces were first made by hand in the mid-16th century, but were replaced by machine-made bobbin mesh by the mid-1800s. Linen was the most used thread for lace in Europe before 1800. After that time, Cotton became more widespread. Other threads used in lace include: Silk, Hair, Wool, metal, and, more recently, synthetic fibers.