Originally an acronym for light amplification by stimulated emission of radiation. Common usage, however, has applied the term laser to any of several devices that convert a wide range of electromagnetic frequencies into one coherent frequency. This is done by exciting the atoms to reach a higher energy level where their wavelengths are in a single phase. The resultant laser beam has extremely intense energy. Lasers, first patented in 1960 by Bell Labs, have now been made using ultraviolet, visible, infrared, and microwave wavelength regions. Lasers are used in communication (optical fibers, satellites), medicine (surgery), spectroscopy (FT-IR, Raman, mass spectrometry), photography (holography) and for geographical mapping in difficult locations (planets, moon, ocean floor). Lasers have been used to remove encrustations, overpaint, soot, stains, fungi, and graffiti from several types of surfaces (Asmus 1978 and 2000). 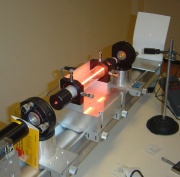 Can irreparably damage the eyes. 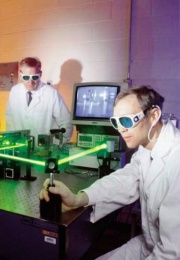