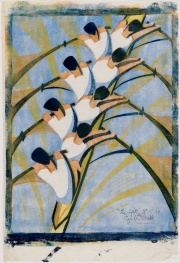 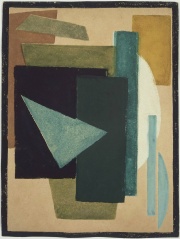 A block print prepared from a design engraved into a piece of Linoleum. Linocuts, first made in the late 19th century, exhibit a wider variety of patterns than woodcuts since linoleum is much easier to cut than wood. Since the linoleum is smooth and has no directional grain, it's patterns often included flat, uniform color regions. The images were used for works of art on paper as well as printed textiles. The linocut technique was made popular by Pablo Picasso and Henri Matisse in the 1950s.