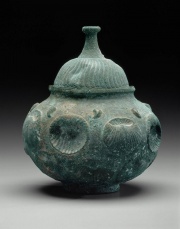 A green mineral composed of Basic copper carbonate. Malachite occurs naturally with the blue copper carbonate mineral called Azurite with malachite being the more abundant of the two. Major deposits of the copper ores have been found in Siberia (Nizhne-Tagilsk), France (Chessy), Nambia (Tsumeb), Congo, Australia (New South Wales), and the U.S. (Bisbee, Arizona). Both malachite and azurite have been used as gemstones and paint pigments since before 3000 BCE. Malachite is prepared as pigment by careful selection, grinding, washing, and levigation. Coarsely ground malachite gives a dark green color while finely ground particles give a lighter more transparent tone. Malachite is a lightfast but is sensitive to acids and sulfur fumes. Basic copper carbonate can also be made artificially by coloring chalk with Copper sulfate. The synthetic pigment, called Green verditer, tends to have regularly sized particles with rounded edges with a paler color than malachite. Natural malachite was occasionally used in tempera based paintings before the 16th century and later, green verditer was used for both distemper and oil based interior house paints in the 19th century. Malachite is also found as a corrosion product on metallic Copper. 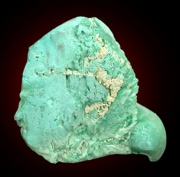 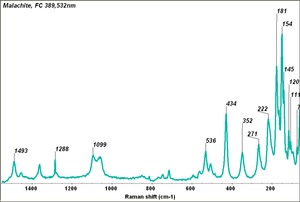 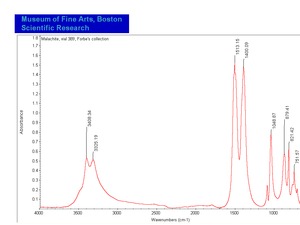 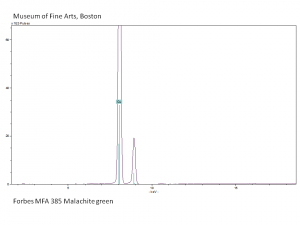 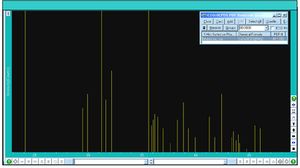 Insoluble in water and ethanol. Decomposes in acids with the evolution of carbon dioxide bubbles. Decomposes with warm alkalis. Stable in light.

Perfect cleavage in one direction. Streak = green. It is a brittle mineral that fractures conchoidally with splinters. Pigment particles are coarse and irregular.

Under the polarizing light microscope, malachite is coarse (broad particle size distribution). It has perfect cleavage and the crystalline structure is immediately apparent. Shapes can be euhedral with tabular forms, and are sometimes even prismatic. Banding often apparent in some particles. Smaller particles can appear as shards, (acicular) needle-shapes, or columnar-shapes. Larger particles are often observed often to be fibrous agglomerates or botryoidal masses (grape-like clusters) that do not go to complete extinction in XPL. Larger particles are pale green to blue-green with smaller particles almost colorless. Relief is moderate (and variable upon stage rotation). RI > 1.662 in β and gamma directions but RI = 1.655 in alpha direction. Malachite is strongly birefringent with higher order jewel tones observed (although thinner, smaller particles may exhibit high first-order tones). Some anomalous blues can be seen. Extinction is straight (although some have reported inclined).

Skin contact and inhalation may cause irritation or allergic reactions. Chronic exposure may cause anemia.