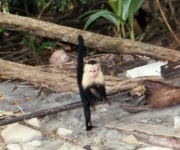 Most natural monkey fur comes from the colobus, a small thumbless monkey of the family Colobinae native to the coasts of Africa. The black and white colobus, or guereza, has long, silky, black fur. Their pelts have long been used by native populations for decoration. In the early 19th century, monkey fur became popular in Europe and the animals were slaughtered to the point that the species is now endangered. Much of the monkey fur in the 20th century market was artificially made from Chinese human hair.