A hard, iridescent inner layer of some mollusk shells, including abalone, snails, pearl oyster, and mussel. Mother-of-pearl, or nacre, is primarily composed of Calcium carbonate in the crystalline form of Aragonite. The crystals are held together with Conchiolin. Pearls are composed of the same material. The color of the nacre can be white, yellow, green, blue, pink, or purple depending of the species of mollusk and the temperature of the water. Warm, equatorial seas tend to produce mollusks with darker or brighter colors. Mother-of-pearl has been used for jewelry since 3000 BCE. It has also been used for decorative inlays, knife handles, cameos, buttons, and beads. 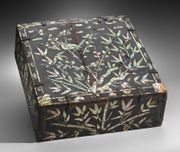 Suceptible to damage by heat, light, humidity and chemicals.