A dark brown, bituminous pigment prepared in the 16th and 17th centuries by grinding fragments of Egyptian mummies. These mummies had been embalmed with Asphaltum (also called bitumen), but over time the asphaltum had lost many of its volatile compounds. The ground residue apparently produced a pigment that was more durable and less susceptible to cracking than fresh asphaltum. In the 19th c., mummy brown was used as a transparent brown pigment for oil painting and for oil glazes. Some substitutes, such as Vandyke brown and bituminous earth pigments, were also sold under the name of mummy. 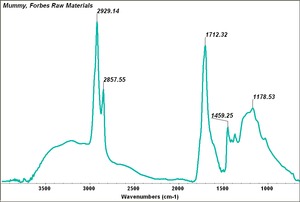