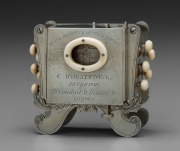 A silvery-white, magnetic metallic element. Nickel occurs naturally in many ores such as nicolite, pyrrhotite, pentlandite, and garnierite as well as in metallic meteorites. Its abundance in the earth's crust is 99 ppm and large reserves are located in Ontario, Norway, Finland, Cuba, China, and Australia. Nickel was first isolated by Axel F. Cronstedt in 1751. Metallic nickel is a hard, malleable metal that can take a high polish and remain untarnished. It is most often used as a protective and ornamental electroplated coatings on other metals, such as iron and steel. Nickel is also used to produce Monel®, a highly corrosion resistant nickel-copper alloy, as well as many other alloys. In Europe, nickel is prohibited in jewelry, watches, and zippers because of its carcinogenic potential via skin absorption.