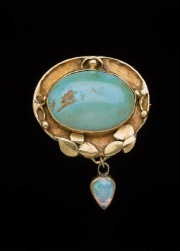 A translucent, hydrated Silica mineral that is used as a Gemstone. Opal is amorphous, brittle and fractures conchoidally. It is lustrous with colors varying from pearly white, pale blue, gray, green, yellow, red and brown. High quality opals produce interference colors due to the presence of microscopic cracks that form when the stone hardens. The stones are often oiled to bring out the luster and deepen the color. Opals have been mined or gathered since the late iron age (500-50 BCE) as gemstones and ornamental stones. In Roman times, opals ranked second to emeralds as the most valuable gemstone. Fire opals have been mined in Mexico for over 500 years. Black and white opals were discovered in Australia in 1870. Other sources for gem quality opals are India, Brazil, Honduras, Hungary, Slovakia, France, Japan, New Zealand, and the United States (New Mexico, Nevada, Oregon, Idaho). The first synthetic opal, Gilson Stone, was made by Pierre Gilson in the 1960s. It is composed of laminated glass and bits of foil that produced a full spectrum of colors arrayed in a linear fashion. Slocum stone (Opal-essence) is one of the best types of imitation opal. Most synthetic opals have lower densities (1.9-2.0 g/ml) and can be differentiated under magnification and/or using UV fluorescence.