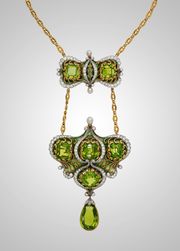 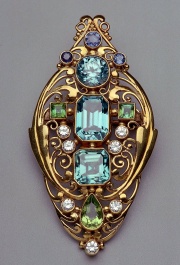 A transparent, yellow-green Gemstone. Peridot is a transparent form of Olivine that was known in ancient Greece and in Egypt. Many of the green stones worn by Cleopatra were peridot. The main old world source for peridot was the island of Zabargad (St. John's Island) in the Red Sea. Peridot was called an evening emerald because it appears to lose its yellowish cast at night. It has sometimes been misidentified as emerald and as green glass. Former names include topaz (Greek) and zerberdjet (Persian). Peridots are still obtained from Zabargad and also from Brazil (Minas Gerais), South Africa, Kenya, China, Myanmar (formerly Burma, near Mogok), Norway (Sondmore), and the U.S. (Arizona, Hawaii).