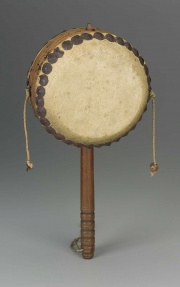 A leather produced from the skin of a domestic pig, Sus scrofa. Pigskin has a characteristic nobby grain pattern produced by the hair follicles which are arrange in roughly triangular groups of three. These holes pass through the leather and are caused by pulling the bristles out of the skin. Pigskin is a tough and durable leather. It is used to make bags, shoes, gloves, luggage, and footballs.