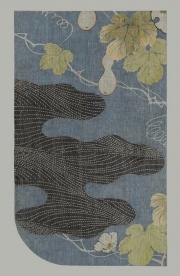 A Bast fiber obtained from the stems of plants from the nettle family, Boehmeria (formerly Urtica) nivea and Boehmeria tenacissema, native to tropical Asia. Ramie is a soft, fine fiber that has been used in China for Paper and fabric since prehistoric times. Its use spread through Europe in the Middle Ages and it has been cultivated since the 1930s in China, Japan, Europe, South America, and the United States. Ramie is a white, durable fiber that is very lustrous and dyes well. Degummed ramie is almost pure cellulose and its fibers are stronger than Cotton, Hemp, and Flax. It is used for twine, fishnets, sewing thread and fabric for clothing, summer suits, dresses, canvas, tablecloths, and upholstery. Ramie has also been used to produce strong paper for linings, banknotes, and cigarettes. The stiff, greenish-yellow fibers produced from hand-cleaning are called China grass. A Chinese fabric woven from ramie is called Grass cloth.