Odorless, colorless, crystals that are highly toxic to insects and fish but only mildly toxic to mammals. Rotenone naturally occurs in derris root and cubé. It was first isolated in 1895 by E. Geoffroy from the plant now called Lonchocarpus nicou. This powdered plant was used to catch fish by poisoning them. The pesticide is still used to eradicate exotic fish from non-native habitats. Rotenone is also used as an Insecticide, particularly in home gardens, due to its low toxicity to mammals. USDA allowed rotenone to be used on organic produce until 2005. 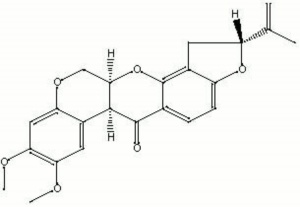