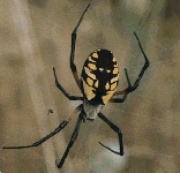 An arthropod member of the order of Arachnida. Spiders are distinct from insects in that they have eight legs (not 6) and a two-part body (not 3). About 34,000 species of spiders exist with some on every continent in the world. Spiders spin a strong silk thread as a snare for their prey. They feed almost entirely on insects. The presence of spiders in a storage area usually indicates that insects are also present. Spiders, however, do not pose major dangers to artifacts themselves.