An elastomer made by copolymerizing Butadiene with Styrene. Styrene-butadiene rubber is commonly called Buna-S and SBR. Large amounts of the copolymer were first commercially produced in the 1930s as a synthetic replacement for natural rubber. Currently, styrene-butadiene is the most widely used synthetic rubber. SBR has good water and heat resistance but poor Oil, Solvent, and Oxidation resistance. It also has a tendency to crawl. SBR is used for tires, footwear, adhesives, coatings, and carpet backing. 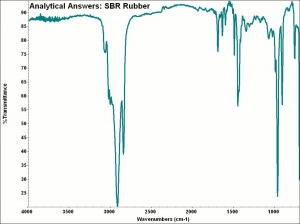