[DuPont] A registered trademark for a solid white polymer that is resistant to almost all chemicals. Polytetrafluoroethylene was accidentally discovered in 1938 by Roy Plunkett at DuPont during an attempt to synthesize tetrafluoroethylene. The new polymer was found to be resistant to heat, chemical, light, and adhesion and subsequently marketed as Teflon® by DuPont in 1943. Teflon® is a soft, opaque material that is unaffected by acids, alkalis, and organic solvents. It is widely used for containers in chemical plants, for rockets, bearings, gaskets, and for frying pan coatings. Teflon® is used for stain-resistant, water-repellent coatings on textiles. It can also be prepared as ribbonlike fibers, which are woven, knitted, felted or braided. Additionally, GORE-TEX® is prepared from a microporous Teflon® film laminated on a polyester fabric. 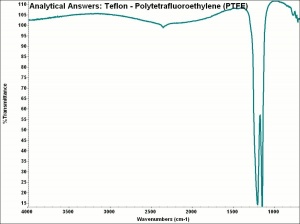 Heated to temperatures consistent with everyday cooking, Teflon emits minute particles that can lodge deeply in the lungs. These particles are deadly to pet birds and can cause a disease known as polymer fume fever, a severe flu-like condition, in humans. Does not burn in flame but evaporates above 215C and evolves HF.

Perfluorooctanoic acid (PFOA), also known as C8, is aman-made chemical used in the process of making Teflon that the potential to be a health concern because it can stay in the environment and in the human body for long periods of time. PFOA and some similar compounds can be found at low levels in some foods, drinking water, and in household dust. Although PFOA levels in drinking water are usually low, they can be higher in certain areas, such as near chemical plants, such as DuPont, that use or make PFOA compounds.