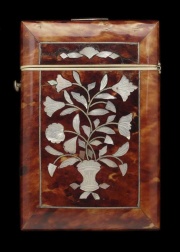 A semitransparent, mottled brown material obtained from the protective outer shell on some large marine turtles, especially the hawksbill (Eretmochelys imbricata), loggerhead (Thalassochelys caretta) and green turtle (Chelonia mydas). Tortoiseshell is composed of Keratin, a fibrous protein. It is slightly flexible and can be heated then molded into various shapes. Tortoiseshell has been valued since ancient times when it was used for rings, bracelets, and musical instruments. Later, it was popular as inlay and veneer. Since the 16th century, it was used to decorate European furniture, often in highly decorative inlay patterns. Tortoiseshell has also been used for boxes, combs, brush handles, pocketknives, and jewelry. Because of its expense, imitations were made from stained Horn, and later, with early plastics like Celluloid or casein. In 1973, the hawksbill and other sea turtles were declared endangered and international trading in modern tortoiseshell became illegal.