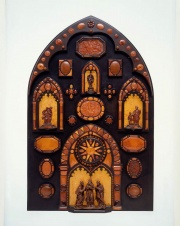 A hard, non-sticky, elastic form of rubber. In 1839, Charles Goodyear discovered a process, termed 'vulcanization' that makes natural rubber into a form that is elastic, flexible and heat resistant. Vulcanization was done by first heating rubber till it became a viscous mass, then sulfur compounds were added and the mixture cooled.. Vulcanized rubber is produced by heating natural rubber with 10-32% sulfur. This is a much higher sulfur concentration than is usually used in vulcanization and the process results in an extremely brittle, dense moldable product. Vulcanized rubber is naturally dark brown and opaque, but on exposure to light and moisture, the sulfur on the surface can oxidize forming a yellowish to greenish tinge. This surface is also acidic and can corrode adjacent metals. When warmed, vulcanized rubber exudes a sulfurous odor. It was used to make combs, buttons, brooches, boxes, medallions, pens, and pencils. It had good electrical insulation properties and was widely used for insulation. The term Vulcanite was used for marketing in the U.S. while the name Ebonite was used in England. Vulcanization is a process used to harden and strengthen rubber. Discovered by in 1839, When vulcanized rubber is exposed to heat or light, it can degrade, forming a brownish, brittle material that may evolve sulfurous oxides. Copper containing alloys can accelerate oxidative degradation (Hatchfield 2002). Recently, a chemical vulcanization process has also been developed that occurs at room temperature. This room-temperature vulcanization (RTV) occurs when the rubber is mixed with a catalyst. The RTV hardening process is generally used with silicone rubbers. 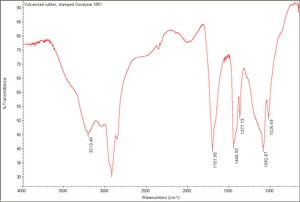