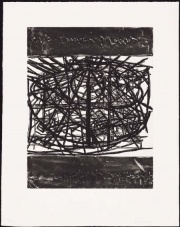 A dry, electrostatic method for photocopying text or graphics. In one process, an image of the material to be copied is projected onto a substrate, such as a sheet of paper or a piece of fabric. This produces regions of static charge that selectively attract finely-divided, charged particles called photoconductive toner which is composed of a pigmented powder in a synthetic resin. The image is fixed by fusing the toner to the substrate with a few seconds of high heat. Black and white as well as color prints are possible using this method. Although Lichtenberg first made recordings by electrostatic means in 1777, the process for copying images by the electrophotographic process was developed by Charles F. Carlson was not developed until 1938. Commercial development of the process in the 1960s by a company called Xerox® resulted in synonymous association of their name with the photocopy process. Later, in the 1970s, the Xerox® process was used to capture images generated with an x-ray source.