More on the data 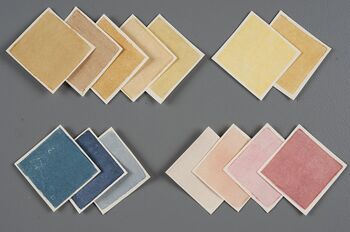 For this research non-invasive, non-destructive techniques that do not require sampling from the prints were used to analyze the colorants. The analytical techniques used are X-ray Fluorescence (XRF), Excitation Emission Matrix (EEM) and Fiber Optic Reflectance (FORS) spectroscopies. Colorant samples were also formulated and printed using organic and inorganic materials traditionally believed to have been used during the Edo period (1603–1868). These were used to cross reference the analytical results. All these elements in addition with visual inspection were then used to identify the colorants.

X-ray fluorescence (XRF) is a nondestructive analytical method used to qualitatively and semi-quantitatively determine the elemental content of materials. The x-ray spectrum emitted from each element has a unique set of energies that are related to the type and amount of atoms present in the sample. For this research, ARTAX open architecture instrument was used.

Since most XRF cannot detect atomic elements below calcium (i.e. all elements with a smaller atomic number than calcium on the periodic table), it cannot aid in the identification of organic colorants.

Excitation Emission Matrix (EEM) is a spectroscopy method that results in a 3D pattern of the fluorescence of an organic material. The pattern is produced by plotting the intensity of a samples fluorescence emissions occurring a a series of stepped excitation wavelengths. Each material has a reproducible 3D fluorescence pattern that allows its identification. Even the lack of fluorescence, which indicates the material is non-fluorescent, also provides a key piece of information for identification of a colorant. The reference colorant samples were printed to create a set of baseline patterns for each colorant.

EEM is used to identify some organic yellow and red colorants. For example, turmeric has a unique fluorescence or EEM pattern making it an easily identifiable colorant using EEM.

Fiber Optic Reflectance spectroscopy (FORS) is a non-invasive technique that can be used for the examination of color as well as for the identification of colorants. FORS uses a fiber optic probe and a pulsed xenon source to provide good sensitivity, to examine small areas and to minimize the interference from ambient light.

Particularly on interest in this study, FORS is able to distinguish between the three common blue colorants used in Japanese woodblock prints, dayflower, indigo, and Prussian blue. This can be accomplished, not only in blue printed areas, but also in greens and purples, which are a combination of a blue and another colorant (yellow, red).

How to look at the results

The results presented in this database are based on the three analytical methods, XRF, FORS, and EEM, mentioned above. XRF was run on all data points but FORS and EEM were utilized according to the visual color as well as speculated color. For example, FORS was run where blue was speculated (i.e. blues, greens, purples, and faded variations) but would not have been run on yellows or reds. Also, at this time other analytical or photographic methods that can also aid in the identification of colorants have not been used. Therefore, the results are not all emcompassing and/or definitive.

The below spectra and pattern are examples of the raw data collected by each analytical method. These data are interpreted by conservation scientists experienced in the particular analytical technique to identify the colorant and, as such, only the interpreted results, not the raw data are given for each print.

What colors cannot be identified?

Throughout history, many of the colors and materials have had multiple names and still may have multiple names associated with them. For this database, we have tried to use the most commonly used name today for the raw material used to produce the color. For example, orpiment (石黄 sekiō) is also commonly called yūō (雄黄), which is actually the Chinese word for realgar. The Chinese term for orpiment, 雌黄 (shiō in Japanese) has also been used to describe orpiment but also gamboge.