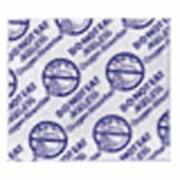 [Mitsubishi Gas Chemical, Japan] A registered trademark for a series of products designed to absorb Oxygen from the air. Ageless® was first sold in Japan in 1977. It is composed of fine particles of Iron (<50 mesh) mixed with a natural Zeolite and a small amount of Sulfur and sea salt (Potassium chloride). This mixture is sealed in small, Polyethylene bags that are permeable to oxygen but not to moisture. The zeolite maintains a constant moisture environment within the bag, and the salt is an electrolyte, thus providing the perfect conditions for the iron powder to oxidize or rust. Ageless® has been used to produce an oxygen-free environment for the killing insects (Grattan and Gilberg, 1994). It is usually placed with, but not touching, an infested object inside a sealed bag made from an oxygen barrier film. The number designation after the Ageless® name indicates the package size, i.e. Ageless® Z-2000 can absorb 2000 ml of oxygen. 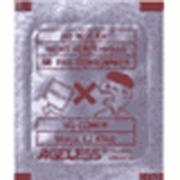 The reaction of oxygen with iron is exothermic.