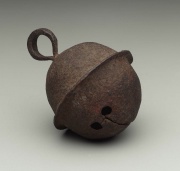 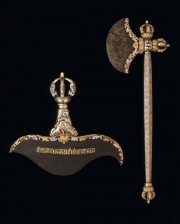 A hard, silvery-gray, malleable metallic element. Iron is the fourth most abundant element in the earth's crust comprising approximately 5%. It is rarely found as a native metal (Telluric iron) except in meteorites (Meteoric iron). Iron is most often found throughout the world as iron oxides (Hematite, Magnetite, Limonite, and Siderite) mixed with other ores. Metallic iron is soft, ductile, malleable, and slightly magnetic. It holds magnetism after it has been hardened. Even though iron ores were abundant worldwide, the development of iron smelting was slow because of its complexity. The smelted iron required repeated heating, then hammering to produce a workable metal (Wrought iron). Iron was used for tools, weapons and containers as early as 2800 BCE in Mesopotamia. By the 10th century BCE, iron began to replace bronze as the dominant metal, thus starting the iron age. Cast iron, containing about 5% carbon, was first made in China about the 3rd century BCE. A non-corroded, wrought iron pillar made about 400 CE still stands in Delhi, India, even though iron is a strong reducing agent that readily oxidizes, or rusts, in air. Many types of coatings have been tried to prevent rust. Techniques for coating iron sheets with tin (Tinplate) were developed in the 17th century, but not widely used until 20th century eletroplating techniques were developed. Iron sheets were first galvanized with thin layers of zinc in the mid-18th century by Melouin. Procedures for refining iron into Steel were established by the late 19th century. Finally, at the turn of the 20th century, a rustproof iron was developed when [[chromium] was alloyed with iron to produce Stainless steel.

Potassium ferrocyanide may be used for the colorimetric detection of iron in corrosion products, stains and pigments. It reacts with iron (III) to form Prussian blue.