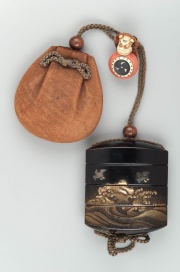 1) A ceramic glaze or a glass that contains small colorant crystals or metallic particles. Aventurine glazes are prepared by adding infusible metallic particles (Copper or Chromic oxide) or by overloading iron or manganese oxide colorants to produce small flecks in the cooled, glassy film. Aventurine glass, sometimes called goldsotne, has a metallic or sparkly appearance. Some pieces were stained blue and called bluestone.

2) A Quartz mineral that contains shiny flecks of Mica that is also known as sunstone. Aventurine is usually green but can also be orange or reddish-brown. It is sometimes used as an inexpensive alternative to Jade. Most aventurine comes from Russia, India, and Brazil.