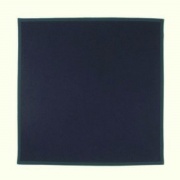 A loosely woven Cotton or woolen fabric with a napped, felt-like surface. Baize was originally made in Baza, Spain (Tortora and Merkel 1996). It is made from wool, cotton, synthetic fibers, or Asbestos that is shrunk, then fluffed to the point that it is difficult to distinguish the weave. Baize is used for papermaking, conveyor belts, absorbent blankets, damping and roofing materials, box liners, and as a cover for the surfaces on game tables. It was also used in old homes to cover doors between a reception room and the kitchen area (Roland and Riley 1981).