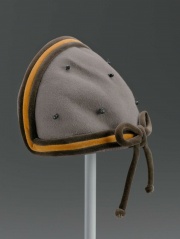 A nonwoven textile composed of matted Cotton, Wool ,or Hair fibers compressed together with heat and moisture. The oldest known fabric samples, excavated in Turkey, are made of wool felt and date to at least 6500 BCE. Felt was usually made from sheep's wool, Goat hair, or Camel hair. Occasionally vegetable fibers (e.g., Cotton, Kapok), rags, recycled paper or synthetic fibers are used for felt. Felt is a good insulator for both temperature and noise. It has been used to make hats, blankets, rugs, insulation, filtration, polishing cloths, and absorbent cloths, as well as to line boxes and instrument cases.