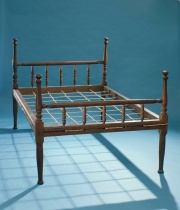 1) An old, but common, name for Sodium carbonate obtain from the Le Blanc process of alkali manufacture in which Sodium sulfide and Limestone are heated in the presence of an excess of coal. The coal gave the sodium carbonate a black color.

2) The residue obtained from drying the black liquor obtained during papermaking. It contains sodium carbonate and carbon black which are collected, separated and reused. See Black liquor.

3) A species of a hardwood ash tree, Fraxinus nigra, native to North America. Black ash has a dark brown timber that is lightweight, tough and elastic. Also called brown ash and mountain ash, it was formerly used in aircraft construction.

4) A common name for Barium sulfide.

3) A small to medium tree growing to 15 m with slender crown. Bark=gray-brown starting as smooth and becoming scaly Leaves=compound with opposite serrated leaflets Fruit=clusters of winged samara with tiny seed